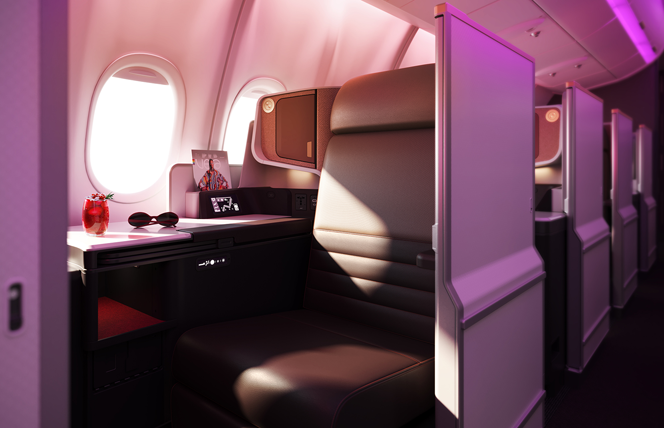 Virgin Atlantic has revealed new Retreat Suites and a more premium, personalised experience for passengers in all cabins travelling on its new A330-900 neos.

The enhancements are part of a multi-billion-dollar investment in fleet transformation taking the average age of the fleet aircraft to under seven years and now using 68% next generation aircraft. This will increase to 100% next generation by the beginning of 2027.

This has so far delivered a 20% in fleet carbon emissions. The A330-900 neos are designed to be 11% more fuel and carbon efficient than the A330-300 they’re replacing and will deliver a 50% reduction in airport noise.

Corneel Koster, Chief Customer and Operating Officer at Virgin Atlantic, said: “We’re proud to unveil our state of the art A330neo and show the evolution of our customer experience, with each of our customers receiving a premium experience regardless of the cabin they travel in. They’ll be better connected with their fellow travellers and our amazing crew in the air, and with their friends and family on the ground.

“We know the most impactful thing we can do as an airline is to fly the cleanest, greenest, youngest fleet possible and the A330neo is integral to achieving this goal. It’s truly a plane for the future.”

Two exclusive Retreat Suites at the front of the cabin will create the airline’s most spacious suite yet, comprising a 6ft7” direct seat to fully-flat bed and a 27” touchscreen with Bluetooth connectivity and wireless charging.

Each suite includes an ottoman that doubles up as an extra seat, so up to four people can comfortably dine, chat or play games in their own private social space.

In addition, the A330neo will offer 30 new Upper Class suites which are fully forward-facing and include a fully-closing privacy door with a ‘do not disturb’ feature. They have passenger-controlled mood lighting, 17.3” touchscreen TV and a mirror.

The airline’s previously launched social space, The Loft, remains a core part of the Upper Class experience but has been evolved to provide space for eight people, with four comfortable seats, self-service fridge and drinks dispenser.

In the Premium cabin, the 46 seats have a 38” pitch accompanied by calf rests in every seat and a 13.3” touchscreen with Bluetooth audio. The airline is also offering its Premium customers an in-seat wireless charging pad.

The new Economy cabin will offer the largest ever economy screen at 13.3”, with an intuitive touchscreen and Bluetooth audio to connect headphones to the passenger’s phone as a controller.  There’s also added storage, AC power and USB ports. The cabin is split with 28 Economy Delight seats, which offer an increased 34” seat pitch, or 156 Economy Classic seats, providing a 31” pitch.

The A330neo will take its first customer flight in early October.