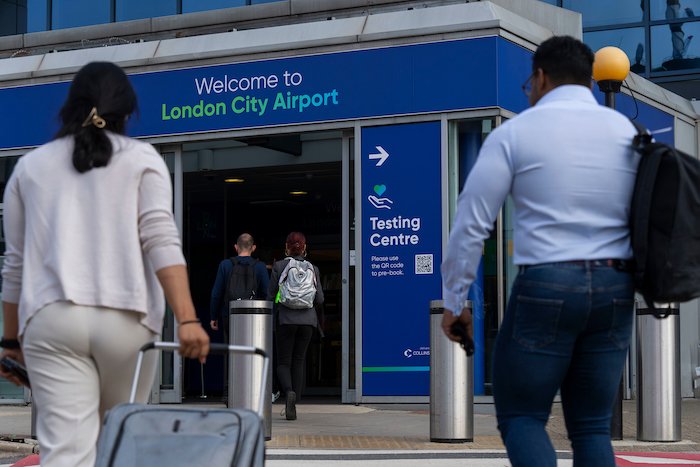 London City Airport is to open a new, larger Covid testing facility in partnership with Collinson.

Less than a minute’s walk from the airport terminal, the facility is able to administer over 200 tests each hour.

An opening date has not been confirmed but the airport said it will open in time for an expected increased in demand from passengers when the UK Government decides to meaningfully restart international travel this summer.

The next announcement on the traffic light system is due on June 28.

This will allow passengers who receive a negative test result to end their quarantine on day five.

Collinson is the only UK Government-approved provider of the Test-to-Release process.

Test prices start from £33 for a Lateral Flow Antigen and £66 for PCR tests. Same-day result LAMP tests are available for £68.

According to London City, the number of people taking tests at the airport has doubled in the past few weeks, indicating a strong acceptance of testing and demand for post-lockdown trips.

Tests are available to both passengers flying from the airport and travellers looking for a convenient London location to take their test before flying from another airport.

London City will be one of the few locations offering Collinson’s rapid RT-LAMP solution, which was developed by Oxford University and approved by the UK Government.

Travellers with appointments made up until 4pm can be released from quarantine on the same day as taking their day five test. This is quicker than RT-PCR tests, which can take 48 hours to turnaround.

David Evans, Joint CEO Collinson, said: “In the UK, we’re lucky to have one of the most successful vaccine rollouts in the world, but we still have some of the most stringent testing and quarantining regimes when it comes to travelling at this time.

“When we launched our first testing facility in the UK, nearly a year ago, the goal was to get travel safely moving again, while giving passengers convenient access to the testing solutions they’d need to fly without needing to face lengthy quarantines after. That is still very much our goal today.

“This testing centre’s convenient onsite location next to London City’s terminal means that passengers can enjoy fast transit and safe and speedy journeys from London’s most central airport, whether travelling on the day or – as we’d recommend – pre-planning in advance.”

Robert Sinclair, CEO of London City Airport, said: “There is no doubt that the next Government reviews are of vital importance. We need to put in place a framework that enables the reopening of international travel this summer.

“I would urge the Government to consider what airports and airlines are doing across the world to keep passengers safe and to look to the many countries across Europe where real progress is being made.

“We believe there is a strong case to expand the Green list in line with the latest scientific data and recognise the status of vaccinated travellers with reduced testing and quarantine requirements, particularly for arrivals from amber list countries.”