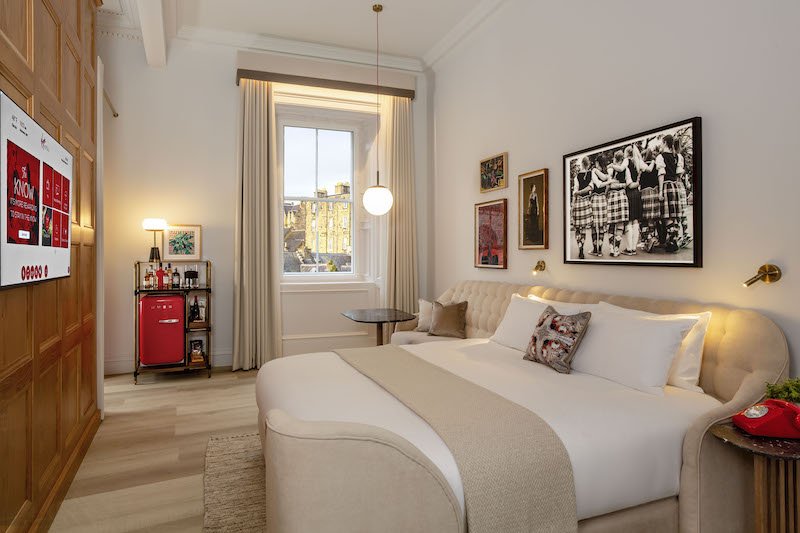 Virgin Hotels is now taking reservations for its first European hotel, Virgin Hotels Edinburgh, which is due to open on June 1. Situated in the landmark India Buildings in Edinburgh’s Old Town, a stone’s throw from Edinburgh Castle, the hotel features 222 Chambers and Grand Chamber Suites, over 10 floors, and multiple dining and drinking outlets. There will be 15 room categories including the signature suite, Richard’s Flat, with beautifully-restored architectural details and contemporary pieces and the Eve Branson suite, named after Sir Richard Branson’s late mother, which is under the bell tower of the restored mediaeval church.

Qatar Airways is to resume flights to London Gatwick from June 5 using a state-of-the-art Boeing 787 Dreamliner featuring 22 seats in Business Class and 232 seats in Economy Class.  The resumption of the Gatwick service complements recently-launched flights to Doha from Gatwick by Qatar Airways’ Joint Business partner British Airways. UK customers will now have access to four gateways, including five-times daily services from London Heathrow, 18-times weekly from Manchester and four-times weekly from Edinburgh rising to daily from 2 June.

Rebecca Duncan has joined easyJet in the role of Business Development Manager. She previously worked at Virgin Atlantic for 20 years, most recently in corporate sales as Senior Corporate Account Manager. She was also co-Chair of Virgin’s Scarlet Network, an internal network to champion women in the workplace, and a mentor for the industry mentoring scheme, Fast Forward 15, a programme aimed at women in the travel, hospitality and events sector.

Down Hall in Essex, a 110-acre country house hotel and spa, has developed its bar, lounge and outdoor facilities as part of a £2.8 million investment. It follows an extensive refurbishment of the hotel’s West Wing in August 2019, along with the reception area and Garden Room restaurant last year. The hotel’s tennis facilities have been expanded with a new padel tennis court while a woodland trim trail experience has also been opened. A new 120-cover al fresco dining terrace will follow in May 2022, as an extension of the hotel’s recently renovated restaurant Garden Room.

Vistara is extending its flight schedules from London Heathrow to Delhi from April 2 with the addition of a Saturday service. It means the airline will operate six flights a week – every day except for Thursday. Vistara is a 51/49 joint venture between Tata Sons Private Limited and Singapore Airlines Limited (SIA), which launched January 2015. Since then Vistara has rapidly expanded its fleet and network and, when in full capacity, operates 250 flights daily to around 42 destinations within and outside of India.