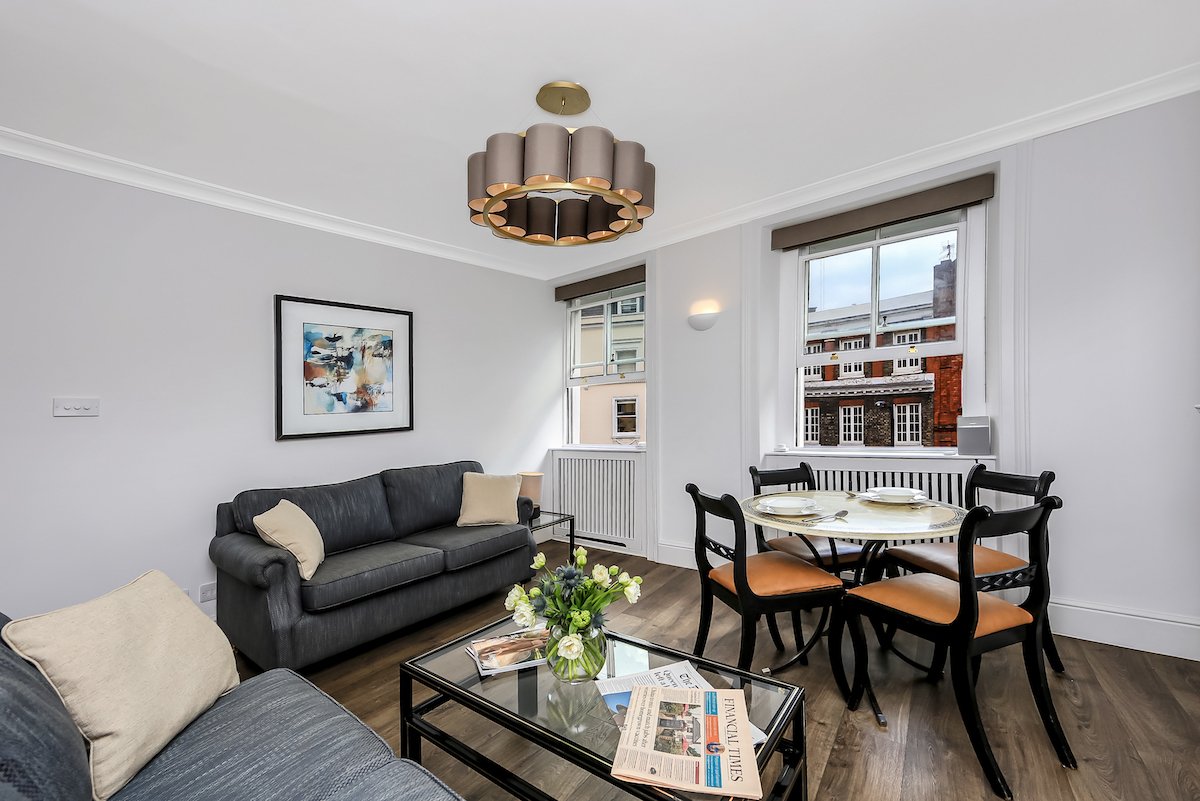 THE APARTMENT: If you’re looking for a London address to impress clients, this is it. Nestled in the heart of Mayfair, just off Piccadilly and a short jog to Green Park and Hyde Park, it’s also right opposite Shepherd Market, the buzzy cobbled square that’s the perfect place to wine and dine clients too.

THE CHECK-IN: The check-in is actually in Mansley’s other Mayfair apartment building, directly opposite at no. 44. I was met by the charming Alberto, who told me the reception is manned 9am-7pm but there’s someone on duty 24/7 if required. He gave me a key card for entry to the main door and to my apartment. There’s also an option to download an app for keyless entry. Alberto accompanied me across to no. 10 and carried my welcome pack of breakfast cereals and jam. Fresh milk and selection of tea bags/coffee/hot chocolate were already in the kitchen.

THE ROOMS: There are five apartments on three floors. Mine was a newly-refurbished two-bed on the second floor. It had a hallway leading to two bedrooms (one twin, one double), a lounge/dining room, bathroom and a compact kitchen. The decor was simple and classic and the rooms were bright due to the large windows. Refreshingly (unlike many hotels) the windows can be opened wide to let the air through. Double-glazing blocked out the traffic noise. It was spotlessly clean and there’s daily housekeeping. The only thing missing in the kitchen was a dishwasher but apparently Mansley plans to add one when the apartment is next due for a refresh, probably around 2024. Most other Mansley apartment kitchens have them.

THE BUSINESS: The Wi-Fi was speedy and I could sit and work quite comfortably at the round dining table.

THE FACILITIES: The flat-screen TV had all the usual channels plus some foreign language options and was easy to operate. The shower was powerful, bathroom towels were super soft and little extras like bathrobes are nice for longer stays. Umbrellas (made from recycled plastic) are provided for rainy days. There’s no lift.

THE VERDICT: The central location is hard to beat and I had a fantastic night’s sleep. My only tiny gripe was a lack of space for my toiletries in the bathroom.

An impressive hotel which lives up to its five-star rating. Employees are both friendly and attentive making for a wonderful, personalised service.
Accommodation